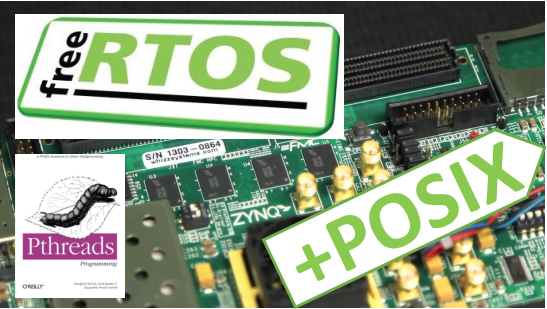 FreeRTOS is a popular free and open-source real-time operating system (RTOS) for embedded platforms. It has its own scheduler, tasks, and synchronisation primitives. Writing concurrent applications for FreeRTOS requires to learn the environment and make use of the provided tools.

In some cases, a developper might want to port an existing concurrent application written with POSIX interfaces (such as pthreads, semaphores, message queues, etc.). Usually there are two approaches here :

However, there is a third option, FreeRTOS provides a POSIX threading wrapper (https://github.com/FreeRTOS/Lab-Project-FreeRTOS-POSIX). The FreeRTOS+POSIX project implements a small subset of the POSIX threading API features so not everything is supported. Nevertheless, this can save time when porting a POSIX application. Another benefit is that developers more familiar with POSIX than FreeRTOS may have an easier time porting their application.

In our case we were interested in FreeRTOS+POSIX because we develop some of our firmwares on desktop computers (e.g., running GNU/Linux) in an emulated environment (QEMU). Where our firmware interfaces to QEMU but runs as a regular userspace application. This has the major benefit of not requiring development boards, gives more visibility (debugging), and allows access to many libraries for quick prototyping.

During a firmware project we were interested in adding asynchronous tasks. On the firmware running on the desktop this could be done easily by using POSIX threads. However, on the real hardware (A Xilinx Zynq platform) our firmware was running bare metal. Adding asynchronous tasks could be done with bare metal multiprocessing but this would be a major hassle. Therefore, the project was migrated to FreeRTOS on the embedded side to have access to tasks and scheduling.

Adding the asynchronous tasks could now be done either by

The path of least effort seemed to be number 3 and worked out well in our case.

While it seems a promising solution, there is not much information available online to do this (it has been discussed on the Xilinx forums without much success, thread1, thread2). This is the main reason I chose to write this guide.

Below is a step-by-step guide on how to add FreeRTOS+POSIX to a Xilinx Vitis FreeRTOS project and a simple message queue application with 3 tasks/threads communicating will be used for illustration purposes (The Xilinx FreeRTOS “Hello World” example application). The steps below target a Zynq platform but also apply for Microblaze softcore processors and the ZynqUltraScale+ MPSoCs family.

This section goes over how to create a platform and example project in the Xilinx Vitis IDE.

Create a platform that will provide the build support package (BSP). You may already have a platform, you can also reuse it. But we will modify the BSP in the following steps.

I created A “Zynq7000” platform based on the zc706 board default XSA. The operating system is chosen to be FreeRTOS 10.

Let’s create a new application project (File/New/Application Project…) and select the platform created above (or choose another existing platform).

And let’s choose the FreeRTOS Hello World application, this will give us a base application to modify.

Once the application project is created we can compile and run it. I’ll run it on the real board.

The application will run two tasks, a Tx task that will send a message to a queue every second and a Rx task that will read the queue and print the messages. Source code is visible here.

The serial interface shows the expected messages. After 10 seconds a timer expires and the callback function will check if at least 9 messages have been sent and print a relevant message. Then it deletes the Rx and Tx tasks.

Before we rewrite the hello world project with the POSIX API we need to add the FreeRTOS+POSIX files to the project and configure FreeRTOS. This is the more obscure part, some documentation is available here and in the GitHub project but there is no straightforward guide for this… (especially not for Zynq).

The folder now appears in the Vitis Explorer

If you try to build at this stage it will fail miserably. There are a few things that need to be done. First the toolchain must be made aware of the new include directories. Select the project properties.

Choose from workspace, so paths will be relative to the workspace and project, then select the following directories :

The last one is chosen because there is no special include for the Zynq platform and the include file for Windows is (almost) empty (uses the defaults) so we choose that directory (because the file will still be needed).

If you want to include the POSIX include files directly e.g., #include “pthread.h” you should also include

Here, I chose not to include it and include these files specifying the directory explicitly e.g., #include “FreeRTOS_POSIX/pthread.h” in to avoid confusion with the system headers and the risk of including the wrong headers.

Check that all the directories are added as shown below.

As per the documentation the FreeRTOS+POSIX project has some dependencies.

There is another dependency that is not documented but the code will not compile without it.

Because the code in the FreeRTOS+POSIX project uses static allocation functions (e.g., xSemaphoreCreateCountingStatic()). Note that static and dynamic allocation can both be used at the same time in a project (e.g., xCreateTask() and xCreateTaskStatic() will both be available).

This can be changed in the FreeRTOSConfig.h file. Be mindful of the path because several copies of this file exist in the BSP so check that you are editing the correct one (see path in screenshot). You can also use “Open Declaration (F3)” to go to the symbol from a reference in a compiled project. Note that “#define configUSE_POSIX_ERRNO” is not present in the file and must be added (the other options only require to change 0 to 1).

The configSUPPORT_STATIC_ALLOCATION requires the user to provide static allocation callback functions as described in the documentation.

For this I created a file called “static_allocation.c” in the same directory. I added the include “FreeRTOS.h” directive and copy-pasted the functions from the documentation in the file.

I chose to add this in the BSP, because it is related to the configSUPPORT_STATIC_ALLOCATION option, but this file can also be added in the application project instead of the BSP. The code could also be directly copied in the freertos_hello_world.c file). Save the file and now we should be able to build the project

The project now builds without errors.

Now that we integrated the FreeRTOS+POSIX code and configured FreeRTOS let’s rewrite the example with the POSIX API. The resulting code is shown below. The main differences are

Running the example (on the ZC706 board) we observe the desired behavior :

The code of the POSIX version is listed below, and available download here (with both original FreeRTOS and FreeRTOS+POSIX versions) :

Thanks to FreeRTOS+POSIX it is possible to run code that relies on the POSIX threading API directly on FreeRTOS. This was helpful to us because now we can run the same firmware code both on a desktop computer and on the embedded platform. It is true that not all POSIX features are supported but most of the basic use cases are covered.

The documentation inside the header files in https://github.com/FreeRTOS/Lab-Project-FreeRTOS-POSIX/tree/master/include/FreeRTOS_POSIX gives a good overview of what is supported and what is not (and for the curious the .c files have the implementation). From the example above we can already see that we have threading, timers, message queues, and of course there are semaphores and condition variables.

For us, the possibility alone to run asynchronous tasks in our firmware both on GNU/Linux and on FreeRTOS relying on the same code is a major benefit ! Removing the need maintain two different code bases or rewriting our firmware with an OSAL.